I offer an important preface to this profile. I strongly believe that a ceremony is never “about the celebrant”. A wedding is always about the two people being married. A funeral is always about recognising the life and legacy of the deceased and gently healing the loved ones mourning their loss. A celebrant simply facilitates but does not dominate a ceremony.

That said, a celebrant must garner trust and confidence in their ability to undertake this important role. It is in this context that I offer the following background information. I am also happy to provide a free, no-obligation face-to-face chat.

Peter McConvill offers a wealth of knowledge, experience and personal skills to underpin his vocation as a professional Civil Celebrant.

His customer service ethic was well honed during his 14 years of ownership and management of the renowned Shizuka Ryokan Japanese country spa & wellness retreat in Hepburn Springs. With his wonderful wife Margie, Peter built this unique hospitality business into a multiple award winning tourism icon attracting intense media interest, including the broadcast of various profiles on Japanese television. 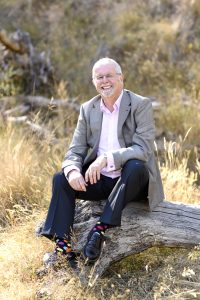 Most rewarding however were the occasions when Peter assisted guests to celebrate special occasions, whether anniversaries, birthdays or even proposals. For instance, he often collaborated to create an ideal romantic environment by laying out rose petals spelling out the marriage proposal on the guest’s bedding. Such experience exercised and further enhanced his sensitivity, patience and inter-personal skills.

Arranging special events, whether professionally or even for his own wedding, have all served to finely attune Peter’s eye-for-detail and creativity. Appearances on radio and television (including singing on Japan’s equivalent to “Countdown”) and ongoing professional development have all served to amplify his communication and presentation abilities.

A lifetime of experience, whether in living overseas, undertaking experiential leadership programs, engaging in the corporate world or experiencing a tree-change, has contributed immeasurably to Peter’s presence and authority as a Civil Celebrant.

He knows his material, having completed significantly more training than the government’s strict legal requirements dictate. First in his class to graduate from his Marriage Celebrancy course, Peter has also pursued additional qualifications in Funeral Celebrancy as well as the conduct of other life celebrations. He was successful in fulfilling the stringent requirements of the federal Attorney-General’s department to become a Commonwealth-registered Marriage Celebrant.

Not one to rest on his laurels, Peter continues his ongoing personal and professional development through active participation in associations such as Australian Marriage Celebrants Inc and the Funeral Celebrant Association Australia.

In doing so, Peter happily abides by the various Codes of Conduct dictated by these bodies in additional to following his own ethical and moral compass, which happens to include strong support for marriage equality.